Because Pro Se Productions’ collection Rat-A-Tat: Short Blasts of Pulp has just come off a free weekend, you might have arrived here in a fugue state. You’re dazed. You’re lost. And all the words you can possibly find are “James Bojaciuk did this to me.”

That’s all right. Settle in and take up a cigar. It’ll all make sense in a tick.

When Pro Se announced guidelines for short fiction, only one thing occurred to me. Sherlock was around and gaining steam, Elementary was either just starting, or had begun a massive ad campaign, and all around writers were striking up stakes on reinvented Holmeses and new-age Watsons. It was the hit literary fad, for awhile. Some great (Elementary, Locked), others less so.

But they all missed the point.

They made a fatal mistake.

They assumed a Sherlock Holmes could arise in our age: an age of inescapable social conventions, standardized tests which coddle from crib to grave, and an ever-present government. Holmes would have only two options, to attain even a fraction of the power he so readily had in his native age: find himself drafted into a higher power (which Elementary and Sherlock have both played with), or drop-out deadbeat into the criminal classes.

Thus we have Lel. The result of a wasted intellect, and constantly called lower into the dregs. 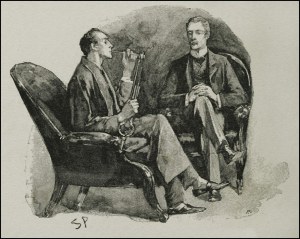 Watson would fare better, if reborn into this age. There’s any number of hipsters and millennial (a class I unfortunately belong to) who get by simply on the idea of writing. That Watson would actually write, and write memoirs of his own life, would make him a god among his class the way the true Holmes was among his. But that was altogether too easy, and too cute. Thus we’ve not taken his silver-tongue writing, but we have made it unintelligible. He’s eastern European (probably) and so uncertain in his new tongue that there’s no hope he’ll ever set down a record of his adventures.

Thus we have Kiprianov. The result of a displaced person, but still brave and honorable and military-trained.

And, calling back to A Study in Scarlet, their very first story involves a man named Stamford bringing them together. Of course, he’s dead; but a shovel and some sweat can certainly bring him back up to the surface…

Is it my greatest story? Not by a long shot.

But dang if I didn’t have the time of my life writing it.

You can buy Rat-A-Tat: Short Blasts of Pulp right here.

Note for Crossover Fanatics: Kiprianov and Lel do not take the place of Holmes and Watson in a given shared universe; the habitant of the grave they dig up, Stamford, is intended to be the grandson of the Stamford who brought Holmes and Watson together; the serial killer with a thing for left hands is an invention of M.H. Norris, though he has yet to appear in print (but goes to show she has a thing for serial killers); daring readers may choose to interpret the gravestone marked Zalgo as a Great Old One’s toe-hold on our reality.

A Walk Into the Past…